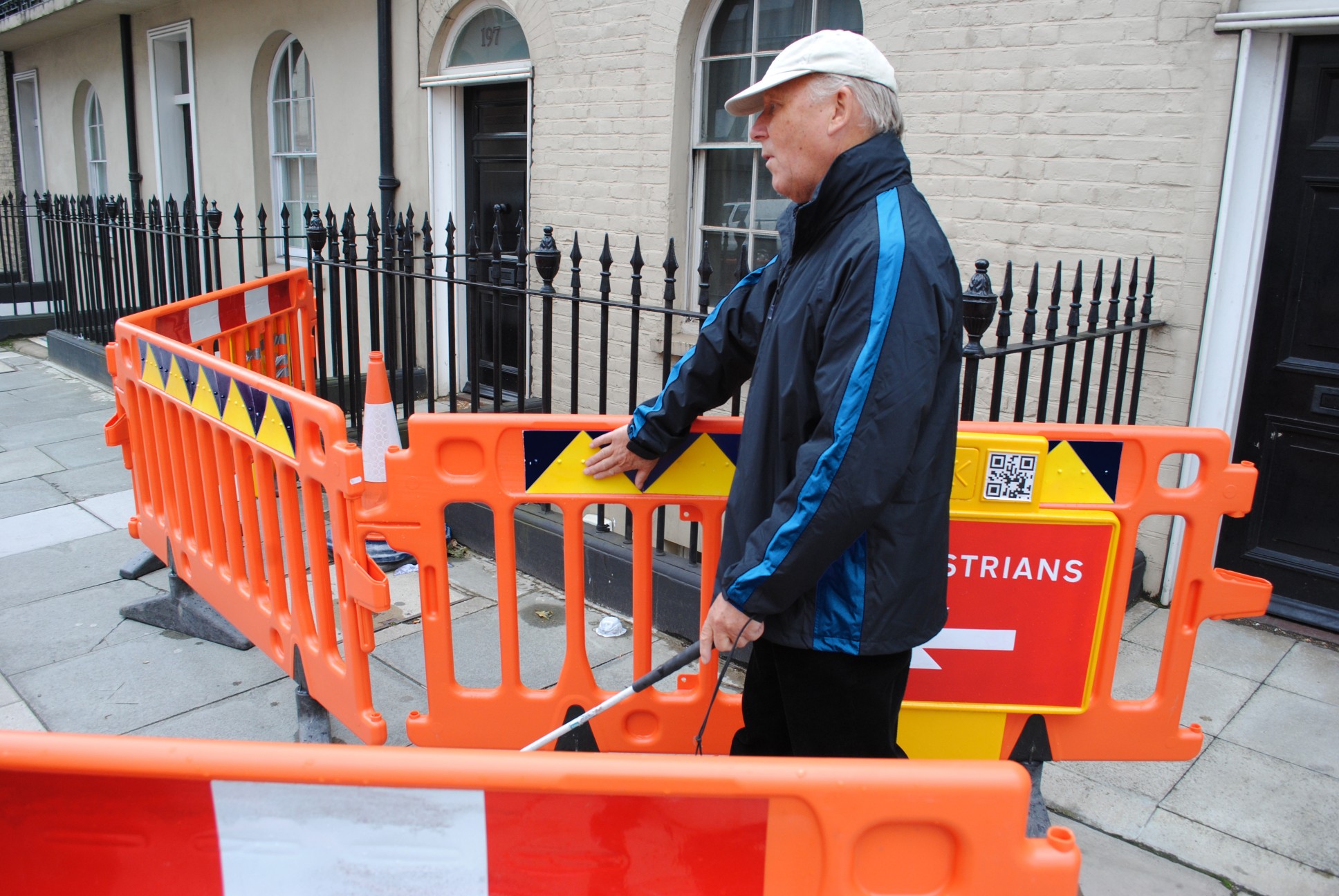 Sight Line is a set of changes to the design and deployment of roadworks signing and guarding equipment to make roadworks easier to deal with for people with sight loss. Ross researched and developed it whilst at the Helen Hamlyn Centre for Design in partnership with the Royal London Society for Blind people (RLSB) in 2011/12. The brief for the project came out of research conducted on the first Sight Line project for the Commission for Architecture and the Built Environment in 2009/10.

Roadworks present particular difficulties for people with sight loss because of the extent to which they rely on predictability in their environment in order to navigate. Sight Line helps by adding layers of: tactile, high-contrast visual and digital information, helping people become aware of and make sense of temporary changes to the street environment. It has been designed to require the smallest possible the changes to equipment minimising the cost of implementation.

In 2012 Sight Line was evaluated in a comparative on-street test with the existing equipment and was preferred by 11 of 13 participants with sight loss. A paper describing the system, the research that informed it and this initial evaluation was published in the Municipal Engineer in March 2015. A longer description of the research, development and testing in 2011 and 2012 can be found in the initial project report. 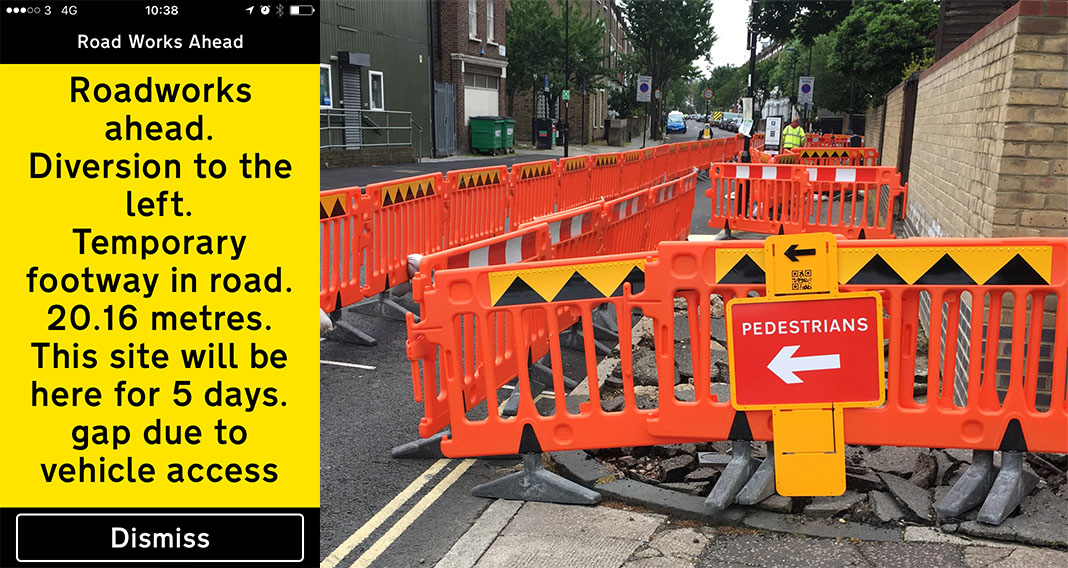 A working pilot of the system was run as part of Transport for London’s Future Streets Incubator scheme on Fairbridge Road in Islington in partnership with CVU in the spring and summer of 2016. This trial focused on the usability of the system from the contractor’s point of view and the accuracy of the tactile and digital information they provided in the site setup and app entries. A report on this trial was made to TfL in August 2016 with the system as tested described in a technical overview.

In November 2016 leading roadworks equipment supplier P.F. Cusack began manufacturing barriers and signs that are compliant with the system, along with other improvements such as anti-trip feet that they have developed with Guide Dogs. These can be used by contractors with the StreetWorks.Info Log app from PF Cusack  (iOS, Android) which writes to the Sight Line database but adds extra functionality for communicating with the general public about works purpose duration, further reducing the need for sign clutter around roadworks sites, through the StreetWorksInfo app and website. Details of how to use the deploy the system in different situations is available in the operation manual.

The Sight Line app (which provides the audio descriptions) is available from the App Store and https://vimeo.com/217170668Google Play. You can find API details at sight-line.uk.

Sight Line and StreetWorks.info have been deployed in five UK towns and cities by seven utilities and construction companies. New deployments are ongoing and improvements are made to the system based on feedback from contractors and users. Deployments of the system with Transport for London and Balfour Beatty have been recognised in the London Transport Awards and the Street Works UK Awards respectively. 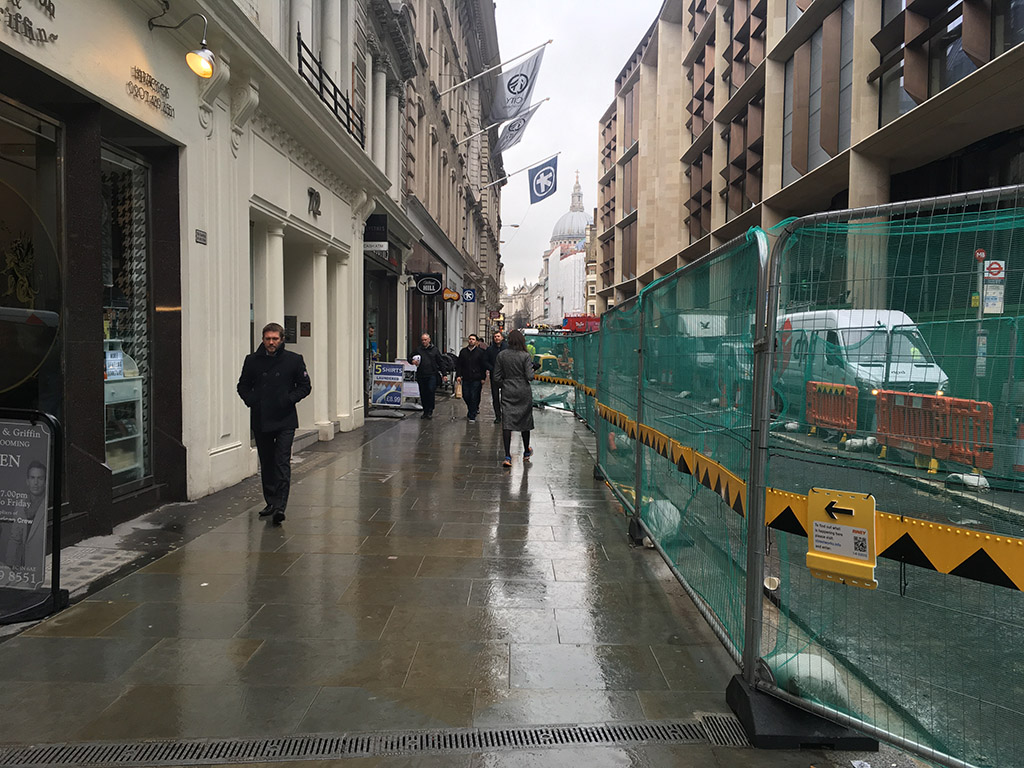 If you would like to see the system deployed in your area contact your councillors, local authority highway department or local utility companies and request they make it a requirement in your area.