The various pieces of shadowing research I have conducted, since the first Sight Line project for the Commission for Architecture and the Built Environment (CABE) back in 2009/10, have indicated that blind and partially sighted people are not finding tactile paving as useful as it could be. Tactile paving is often not present where it is required (to mark the boundary between the pavement and the road for example), whilst in other places, people find large areas of tactile that they are unsure the meaning of. Where the shadowing projects have included other older and disabled people, I have experienced the negative impact that excessively large areas of tactile paving have on them – from people with arthritis falling, to wheelchair users being unable to get up dropped kerbs.

These findings are consistent with those from larger studies that indicate older people identify tactile paving a barrier to going outdoors and as a contributing factor to falls, especially when installed on sloping surfaces whilst many people with sight loss find the system difficult to understand and use. Laboratory experiments have also revealed that walking tactile paving affects the gait of older people in a manner consistent with increased risk of falling.

My interviews with street designers and tactile paving manufacturers as part of the CABE project and subsequent discussions with designers at Urban Design London, CIHT, Urban Design Group and other industry forums, indicated that they found the Department for Transport (DfT) tactile guidance confusing, internally contradictory and difficult to apply in situations created by other DfT documents such as Manual for Streets.

In November 2014, in partnership with the Guide Dogs policy team, I ran a workshop in bringing street designers, engineers, policymakers, rehabilitation workers and street users with sight loss together to discuss the good and bad of tactile paving and look for improvements to the guidance. I made a series of tactile models of options for paving layout in various situations to ensure that all participants knew exactly what was being discussed. I got the various stakeholders – individuals with sight loss, the leading policy specialists in the sector, a rehab worker, a prominent urban designer and a leading road safety auditor – to give speeches setting out the good and bad of the tactile system from their points of view. These were followed by a detailed and constructive discussion of possible ways forward. Some simple and obvious changes to the tactile guidance emerged from these discussions that had the unanimous agreement of all of those present. I wrote up a record of the discussions and these original proposals.

Individuals from the DfT who had participated in the workshop felt that these consensus points could form the basis of a local transport note, the means by which they issue interim updates to their guidance.

At this point organisations who the Guide Dogs policy team had not felt should be included in the workshop because of their lack of knowledge and expertise in the area became involved in changing the document. Despite concerns about the integrity of the process of discussion and consensus that had led to the proposals, all of their requests for changes were made with the exception of one – which sought to reverse the proposal that the blind and partially sighted workshop participants had been most excited about – to ensure that all level surfaces were delineated with at least 800mm depth of tactile paving.

After discussions with these organisations and numerous re-writes the proposed changes were published as a consultation document by the DfT in Autumn 2015.

This document included for the first time a clear and unambiguous requirement for any level surfaces to be delineated with tactile paving at a depth of at least 800 mm. This replaced a section of the guidance that recommended only partial delineation and the use of guardrail or a 25mm kerb which has been shown by more recent research not to be reliably detectable by people with sight loss.

Also for the first time it included a requirement for a specified level (50 points) of tonal contrast ratio between tactile and surrounding paving. Research measuring the tonal contrast level of 30 crossings had shown that, despite compliance with the colour requirements of the existing tactile guidance in most cases, none of them met the 30 point requirement used in the building regulations for internal environments.

As part of the consultation in partnership with the DfT I ran four open-access workshops facilitated by tactile models in London, Manchester and Bristol. It became apparent that attendees were arriving with some fundamental misconceptions about:

The evidence base on which it was written

The way the guidance is used, in combination with other DfT documents to arrive at actual street designs

The origin of and impetus for the proposed amendments

We worked hard to correct these misconceptions in the workshop but judging by the responses to the consultation that have been published, such as from the National Federation of the Blind, we failed. I wrote a synopsis of these workshops for the DfT.

The DfT have not announced their response to the consultation. In a post entitled “Campaign Win” the RNIB campaigns team announced that the “The Department for Transport has now said the current proposals will be dropped”. As a result dangerous undeliniated level surfaces, like this brand new one in Walhamstow, will continue to appear as part of routine traffic calming and accessibility improvements up and down the UK until when, if ever, the DfT published fully updated guidance. 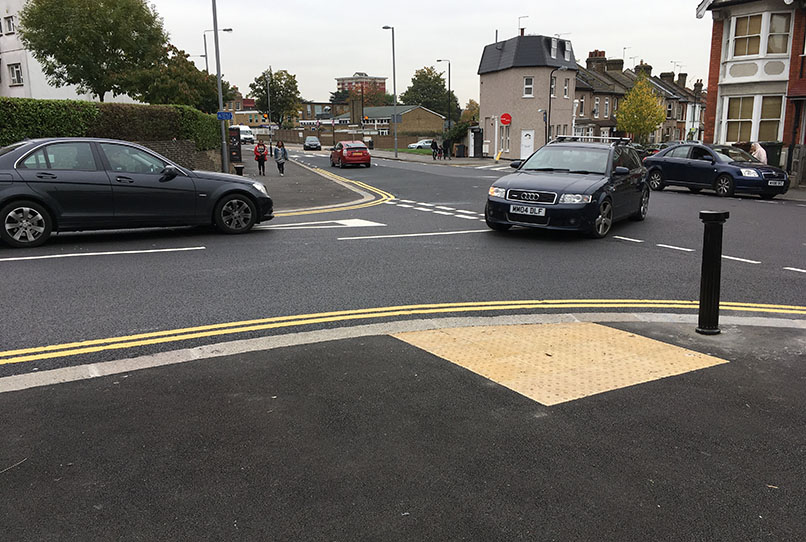