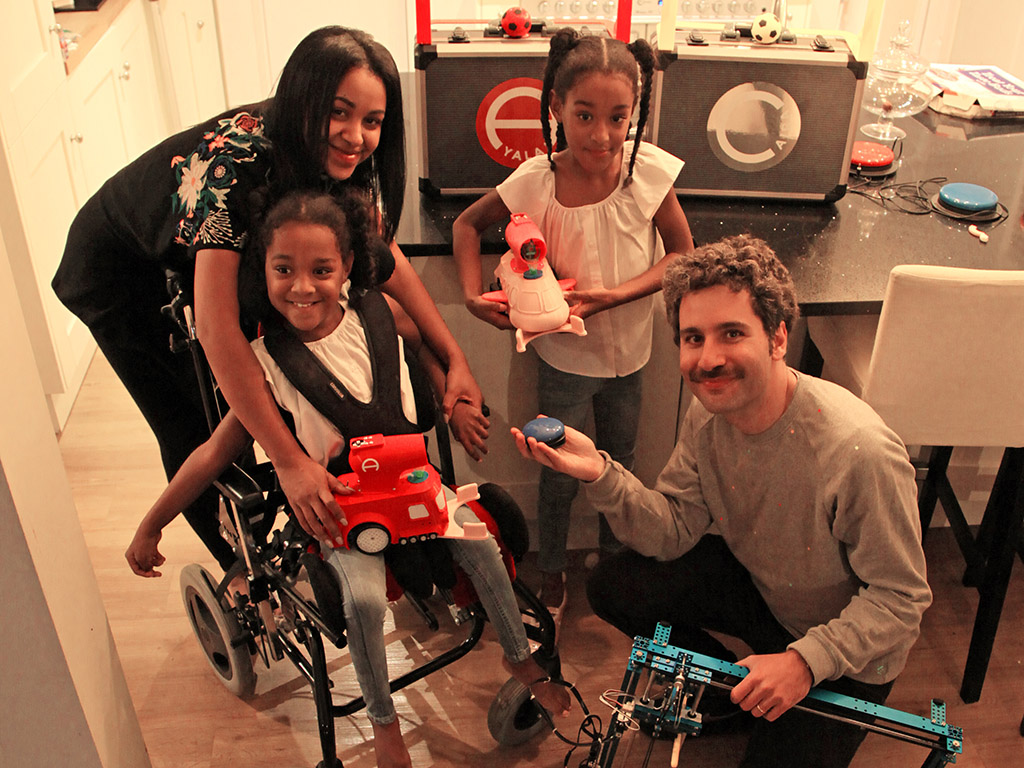 Ayala and Caira are identical twins. Due to complications when they were born Ayala has Cerebral Palsy that means she has very little control of her arms and legs. Caira can do everything most little girls can. 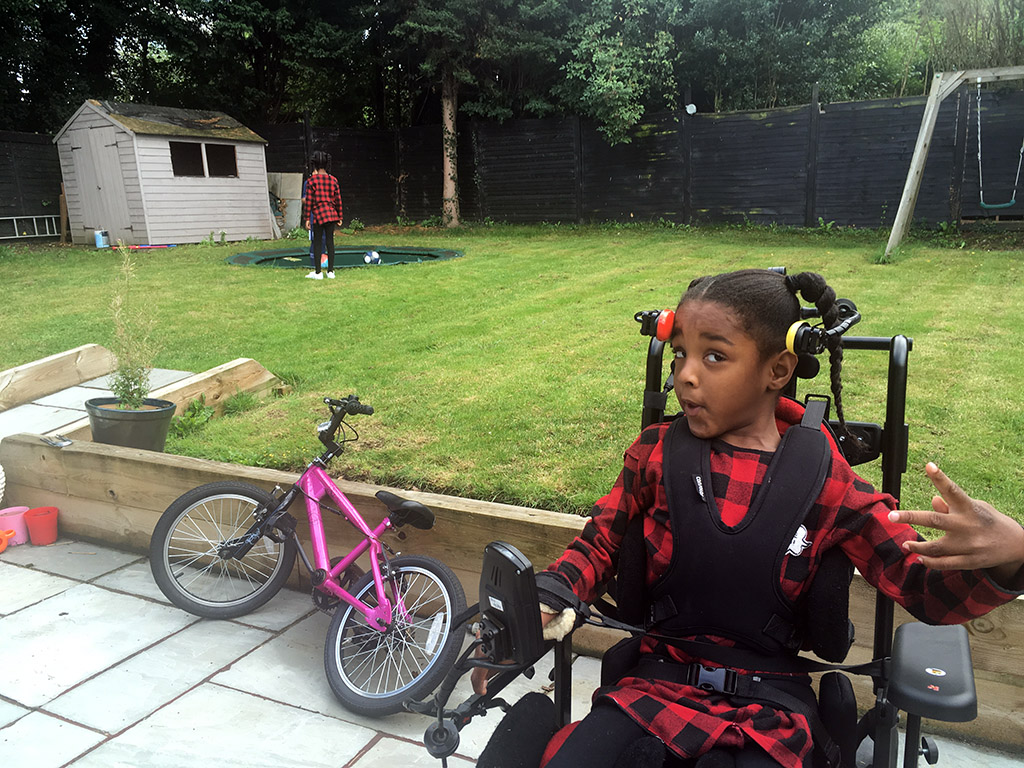 When the girls play together the situation is totally unequal – Ayala tries to get Caira to do what she wants but often Caira doesn’t listen to her and ends up getting told off by Nicole, their mum. This is a bad situation for all three of them.

From the start of this project I knew that I would be designing a play experience for both girls, but one where they would be on as equal a footing as possible. I have always been keen to develop technology in line with the Social Model of Disability which holds that disabled people are disabled not by their impairments, but by a poor fit between their environment and their capabilities. I wanted to design a way for the girls to play where Ayala would not be disabled.

Translating political thinking into actual toys is not totally straightforward though. I didn’t want to enable Ayala by artificially disabling Caira. I had to design a way for them to play together that would be as fun as any other toy, but where Ayala was just as able as Caira.

When I went to see the Ayala at school I saw how skilfully she was able to control her wheelchair using a pair of access switches mounted so she can press them with her head. I realised that we could use exactly the same mechanism to allow her to control a toy robot, and that with a pair of robots like that the girls could play all kinds of games from tag to football to hide and seek.

I worked with Akram to design and build a new iOS app – ButtonBot – that could control an off-the shelf MBot robot and itself be controlled by a bluetooth access switch. We used the iSwitch from Pretorian because, as well as being a bluetooth button itself, it also allows two regular access switches to be be connected to it and assigned to a variety of key strokes. I was able to give one of these to Caira to use the built in button and Nicole was able to connect one to Ayala’s existing head switches.

I realised early on that Ayala and Caira did not like responding to direct questions, so I needed a more oblique strategy for finding out from them what their robots should look and behave like. I decided to try and make it a game by telling them that I would draw a picture of their ‘perfect toy’ and get them to tell me what to draw. Caira went along with it and I drew this picture.

Ayala was having none of it and insisted on drawing her toy herself with the pen in her mouth. She described what it was and I annotated the drawing.

I turned those drawings into these robots, based on the MBot but with significant modifications.

Ayala had requested her toy have a hose that shoots water. I thought that water and electronics were not a great combination, and also that Nicole probably wouldn’t appreciate water shooting robots rampaging around her home. A hose that shoots bubbles seemed like a reasonable compromise, and I thought if I made one of those for Ayala I should probably make one for Caira’s robot. I designed a hose unit that holds the guts from a cheap toy electric bubble gun and allows its motor to be actuated by a micro servo.

When Akram and I were playing with and testing the apps and robots we realised that the single switch direction scanning mechanism we were using could be extended beyond the robots. Ayala and Caira love making and customisation activities so we wondered if we could allow them to do something creative. We found a discontinued MakeBlock drawing machine and managed to hack it to allow another new app – ButtonDraw – to control it.

You can see what Ayala, Caira and Nicole thought about what we made for them in the Big Life Fix Children In Need Special. 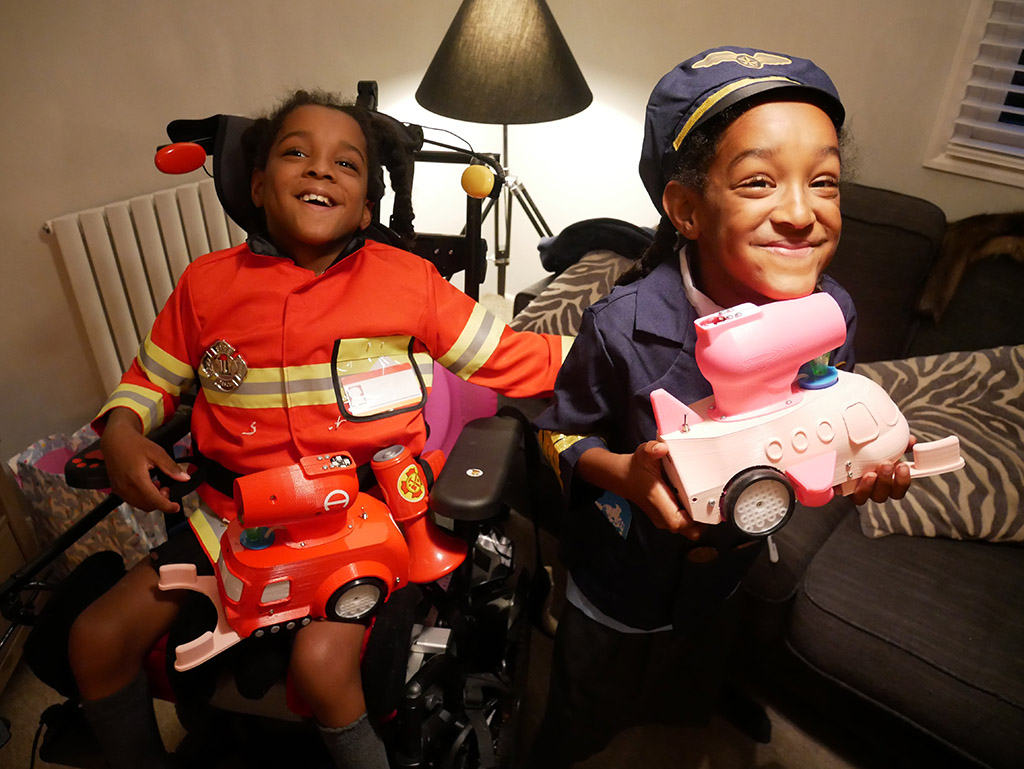 Akram and I believe that the work we have done on ButtonBot and ButtonDraw could be useful to many access switch users and can help move the switch accessible toy experience beyond cause and effect and closer to mainstream toys.

ButtonBot is available in to download from the App Store and MBots can be purchased online from retailers like Amazon, Rapid and RobotShop I will be publishing an Instructable on making Ayala’s fire engine robot soon and the source code for the app is on GitHub. If anyone wants to fork the project to support any other readily available bluetooth compatible robots we would love that!

As the MakeBlock drawing machine we hacked is no longer made or supported we have not released the ButtonDraw app but have published the source code on GitHub. We are on the look out for when a bluetooth compatible drawing machine is available in the UK and will aim to support it when one is. We have high hopes for the Jotto. Again if anyone wants to help with this, knows of a drawing machine that is available, or makes a drawing machine, please fork the project!