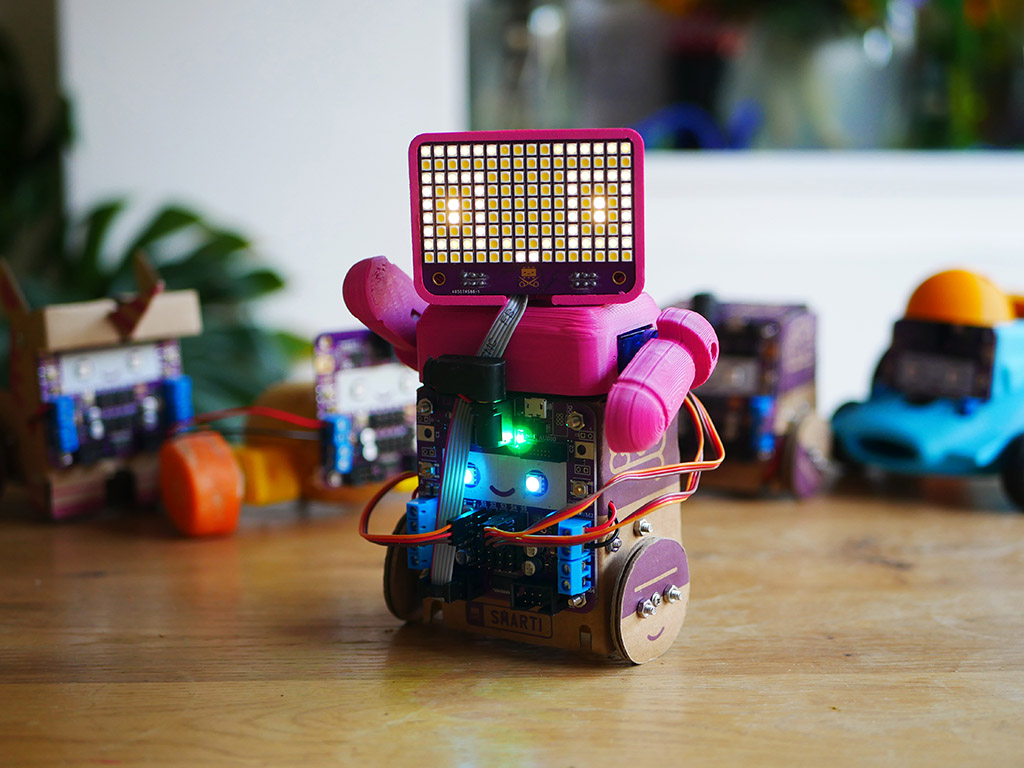 Smartibot takes the affordable, accessible and hackable ethos of the Crafty Robot and applies it to a powerful, programmable, app connected and A.I. enabled robotics platform. It’s a serious robot but it doesn’t take itself seriously.

Like it’s predecessor Smartibot is made of cardboard and the electronics are re-usable so you can create your own robots out of almost anything you have to hand including household waste and even vegetables.

Unlike Crafty Robots Smartibot can do a lot more than just dance around your desk. The Smartibot app allows you to design your own controllers for your robot creations, mapping each of the, up to 14 motors, you can connect to the circuit board, to buttons, joysticks, sliders and d-pads, all without needing to write any code. When you do want to code Smartibot is programmable either visually with Scratch-like blocks, or with JavaScript (the most widely used programming language) using an amazing tool called Espruino. Most excitingly you can attach your phone to Smartibot, put the app in A.I. mode, tell the robot what to look out for and it will use cutting edge image recognition A.I. to recognise and chase, people, vehicles and even pets. You can program your own behaviour using this amazing technology, meaning you don’t need to be an A.I. researcher to build your own A.I. powered robots and machines.

The Smartibot kit comes with all the parts to build three different app-connected cardboard robots, the A.I. bot, that is perfect for carrying a smartphone in A.I. mode, the Teabot, which can deliver two drinks (the helpful domestic robot you had always dreamed of) and the Unicorn (who doesn’t want a robot unicorn?). You can buy Smartibots in The Crafty Robot shop starting at £55.

Smartibot grew out of my experience on the Hello Shenzhen exchange program, organised by the British Council. I spent a month living in Shenzhen (the ‘Hollywood of Hardware’) working on a maker education project with the learning team from the Design Society, a museum in the Shekou area of the city. The head of the learning team was very keen to do a project related the work we had done making sensory rooms more interactive with MSE Genie. We worked with design students from two Shenzhen further education institutions to co-create interactive toys with children with autism at a specialist school. As part of the project I spent a lot of time cobbling bits together into hardware to allow mobile devices to control toys and other electronics, so that the students could design and prototype interactive experiences, without that much time or technical knowledge. I was doing this work in Litchee Lab, a makerspace with a diverse and capable group of members. I got to chatting with some of them about the limitations of the various programmable hardware platforms in these kids of applications and the barriers those limitations placed on their appeal to non-technical parents and kids.

A useful bit of hardware

Soon after we began working on the second series of The Big Life Fix and I started to realise that we effectively kept building the same generic piece of electronic hardware, for various different projects. Basically this was a unit that communicated over bluetooth to a smartphone or tablet (running a custom app), was programmable, and could supply power to and control motors of various kinds. This basic hardware architecture could power Ayala and Caira’s Robots, James’s Zocus Camera Rig, a dog toy launcher we made for Graham, Bobby’s smart hat, and (if sufficiently small) even Emma’s Watch. Since understanding the challenging economics of the assistive technology, on the Enabling Technology project, I have knew that the best way to make a device with assistive applications available at a low price is to work out a mainstream application for it. I thought using such a device to make a bigger, more capable, sibling for The Crafty Robot, could make it viable to produce. I was back in Shenzhen for some follow-up work with Design Society later that year, so went back to Litchee Lab and, with Janek Mann designed the Smartibot circuit board and made some prototypes.

With prototypes in hand it was time to think about the experience we could give people with the Smartibot app. I realised that a piece of hardware with so much flexibility built in needed an app to match so I designed a control pad which works like building blocks allowing you to create the perfect controller for whatever you have made. Akram and I had been experimenting with A.I. models that can run on mobile processors and had been really impressed with their performance. We realised that we might be able to use one of these models to make Smartibot respond to different kinds of objects, and do it it a way that helped kids understand a bit more about how A.I. works. The first time we tried it out we were staggered by how well it performed. I used the skills I had developed designing sheet metal litter bins to design the three cardboard robots for the kit. I knew we needed one that worked really well with the A.I., one that was useful (the Teabot) and one that would make it clear that the kit wasn’t just for boys (the Unicorn). Thanks to the facilities at Machines Room we had prototypes, demos and a video location. We were ready for Kickstarter!

The campaign closed in July 2018 with 1,194 generous backers pledging almost £70,000. Seeing people all over the world put their faith into something you have created like that is an incredibly exciting and humbling experience. I was back in Shenzhen soon after the campaign closed setting up the supply chain. I made these two videos about that:

Some things didn’t end up going totally to plan and we ended up shipping about six weeks late but most of our backers were incredibly gracious and generous about that. Smartibots wizzed off around the world at the end of January and, as with the Crafty Robots before them, it was brilliant to see pictures and videos of people having fun with them pop up on social media. We have been selling them ever since, and running potato robot workshops everywhere from a robotics conference in Estonia to the Apple Store in Covent Garden.

We are regularly creating and publishing, ideas tutorials and resources to help Smartibot owners reuse the parts to make new and exciting things in Projects section of The Crafty Robot website.